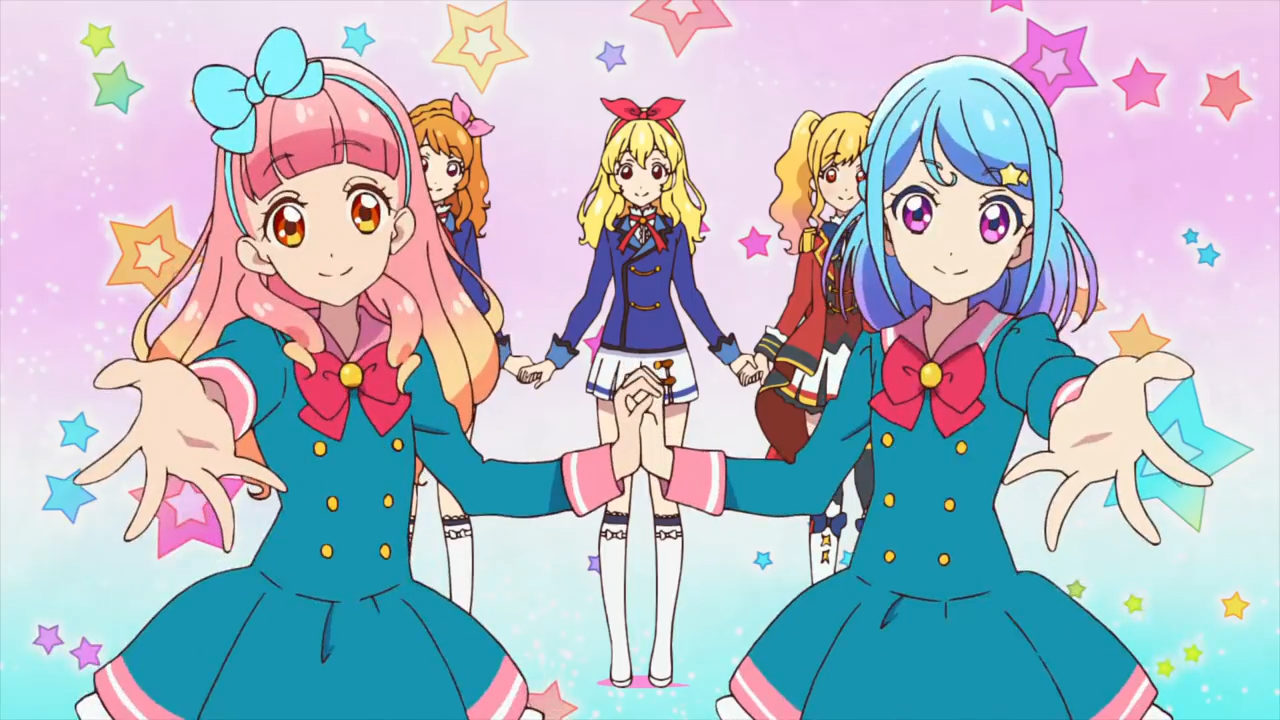 I was definitely waiting until the right time between series to release this, not just being too lazy to sub a 10-line 45-second PV. This is just Youtube quality, feel free to reupload it if you have a better rip. I really only did it for posterity. Also, scroll down now if you want to see the Behind the Subs panel, I finally put it up. 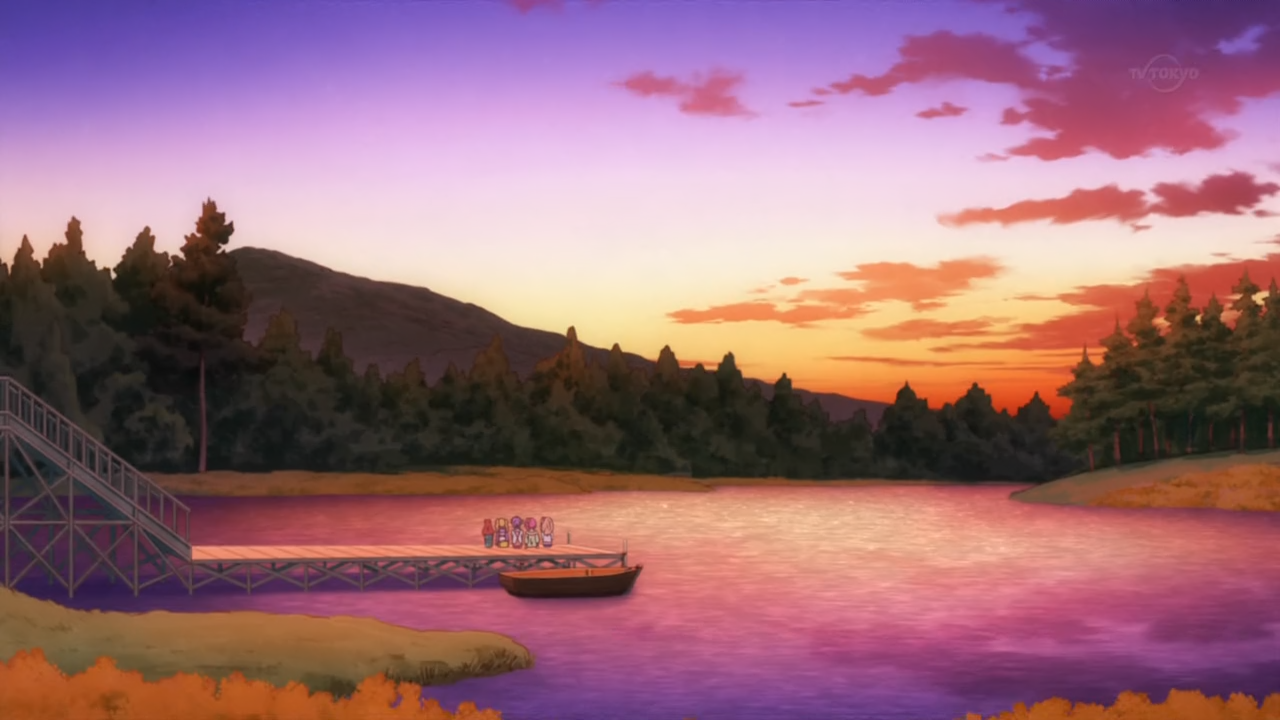 When the sky itself is your Start Line…

First the Shining Line, and now the Start Line. I wonder, what sort of line will Aikatsu lead us to next? And maybe it’s because I got out a lot of my “negativity” yesterday (quotes because I was just venting, not having serious trouble), but I feel so satisfied, accomplished, and complete today. Doing everything in this episode took nearly the entire day, but instead of feeling like the sands were quickly running out, it felt more like I was building a castle, my pièce de résistance. I can look at it and feel proud of myself, because no matter how much time may pass, it will always be there for me. As usual, I’m going to go on for a while now, but before that, here’s a word from my other half of Mezashite who has been with me for every single episode, Etoce:

When Aikatsu! non-Stars ended and Stars was announced, I was sad because I had grown so attached to Ichigo and her friends. Aikatsu had been going on for so long, and even with the new series, it felt like it was ending. Akari had at least existed in the same universe and had a relationship with the original girls—this new “Stars” thing had none of that. And yet, now that Stars has come to an end (and what an end it is), I feel the same thing I felt two years ago. Except this time, I have high hopes for Aikatsu! Friends.

So I was thinking about what I could possibly say about the end of Stars that I haven’t before for Aikatsu, and what came to mind were the differences between them, and what made each unique. It was clear from episode 1 that Stars was going to be taking a bit of a darker theme, or at least one with more dramatic weight. Much of the beginning was full of hardships, what with Yume collapsing and not learning her lesson until she lost Koharu, Laura watching her confidence crumble as she was overtaken and then having a hard time learning to find her way, Mahiru dealing with years of misunderstood feelings and being overshadowed, Ako having her very reason of becoming an idol questioned, and Koharu being ripped away from her best friend and her dreams. Aikatsu had its share of tough times, like with Ran leaving Ichigo and Aoi (a result of her winning and not losing, I might add) or Akari being unable to Special Appeal, but I felt it was overall much lighter.

In particular with this second season, I thought that Elza may be the most tragic idol to date, even surpassing Mizuki. I don’t want to be one to compare traumas between different people, but Elza’s circumstances that were entirely outside her control led to an enormous breakdown. Starting with when Yukie visited the ship but left before her performance, Elza sunk deeper and deeping into depression and desperation with each passing week. In the end, Yukie wasn’t even going to see her if not for Kirara, Rei, and Aria, and that would’ve been the end of Elza as both an idol and a person. The others as well faced serious challenges, from Rei having her identity as a knight rejected by her patron, to Kirara nearly showing PTSD symptoms from her ostracization in New Zealand and fear of abandonment, and even Alice being booted off the ship. Stars ran the entire gamut of challenges, from internal to external to supernatural.

But in spite of that, or perhaps because of that, Stars seemed to be more sincerely supportive of its characters. Despite the lack of units, each of the girls wholeheartedly wished for one another to win, and I think this is because the entire premise began with splitting the school into four separate top idols. But it goes deeper than just that. Even with the Aikatsu Ranking only allowing for one winner in season 2, as the end approached, everyone started wondering if being the best was all it’s cracked up to be. Mahiru doubted the validity of competing with someone operating in a different framework, Rei wanted to beat Elza to save her, and Yume’s dream was to make everyone, including her opponents, shine. It’s that last point that I believe is what really separates Stars from Aikatsu.

Admiration and inspiration are what drives and creates idols. Mizuki followed Masquerade, Ichigo followed Mizuki, and Akari followed Ichigo. It’s a line that passes from one person to the next. But that’s not how it is in Stars. In Aikatsu Stars, everyone begins from the same start line, together. They all trod down the road of stars to stardom. Instead of being a vertical line, it’s a horizontal one. And how cool is that? I only realized that just now, at the end of a long day of immersing myself in Aikatsu, two years down the road from when this season began, typing whatever I can draw out from inside as my fingers keep dropping letters from my words.

Stars was Aikatsu, and yet it was something different, and something more. That’s why it’s Aikatsu! Stars. It’s not about being better or worse, but about exploring the world of idol activities from another viewpoint. I can hardly contain my excitement for Aikatsu Friends, because I know that if I believe, I’ll be rewarded with something that’ll get me going. Just look at all the love that my idol Koharu got. I’m going to keep on trying my best to achieve my goals in real life, and keep on subbing Aikatsu too. And one day, maybe I’ll even become the person I’ve always dreamed of. Because dreams…

The translation of Aikatsu Stars 100 is done, and I’m on the train home now from the con. We’ll have it out tomorrow if all goes well.

UPDATE: Episode out, and video link to my panel is now below.

END_OF_DOCUMENT_TOKEN_TO_BE_REPLACED 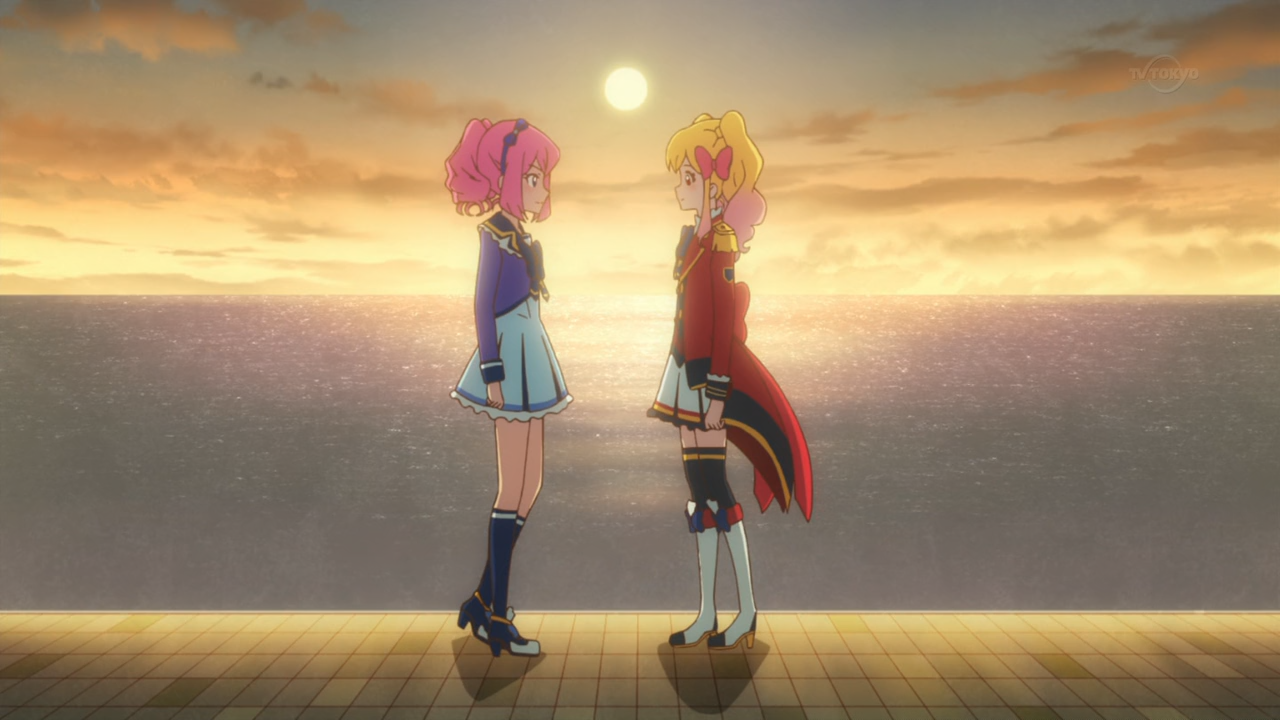 So here we are, once more meeting that familiar mix of emptiness and burning passion. It’s all coming together, along with a reminder that no matter how many times you think you’ve reached the end, it’s really just another new start line. Keep on walking, and do your best to make those dreams a reality, no matter how far above you they may seem.

PS: This time I remembered to say I’m hosting my panel about how to subtitle at Anime Boston this upcoming Friday at 11 AM. Check the schedule if you’re going! 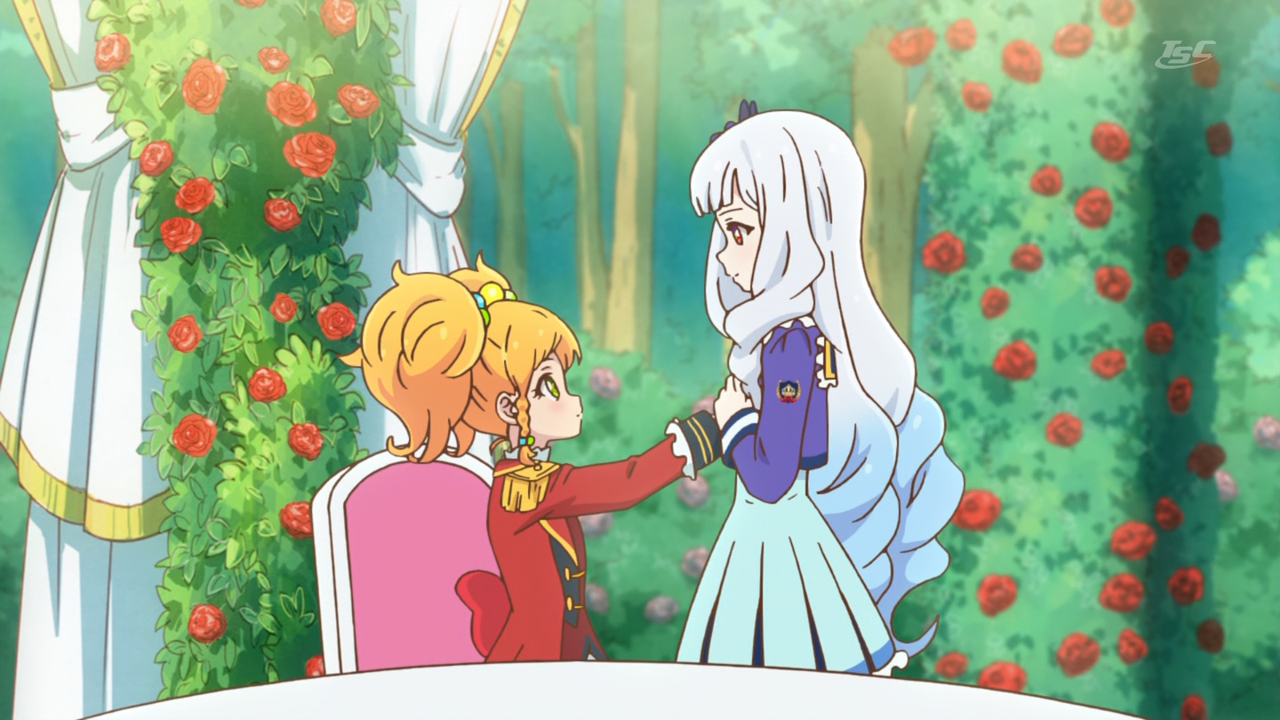 This episode was so fast I almost got whiplash, so watch out. And truly, we were the Kemono Friends.

EDIT: I forgot to mention! I’m hosting another panel at Anime Boston this year titled “Behind the Subs”! And yes, it’s all about how we make subtitles. It’s Friday at 11 AM in Hynes 306. I remembered to add this kind of late, so I’ll say it again in the next post release. 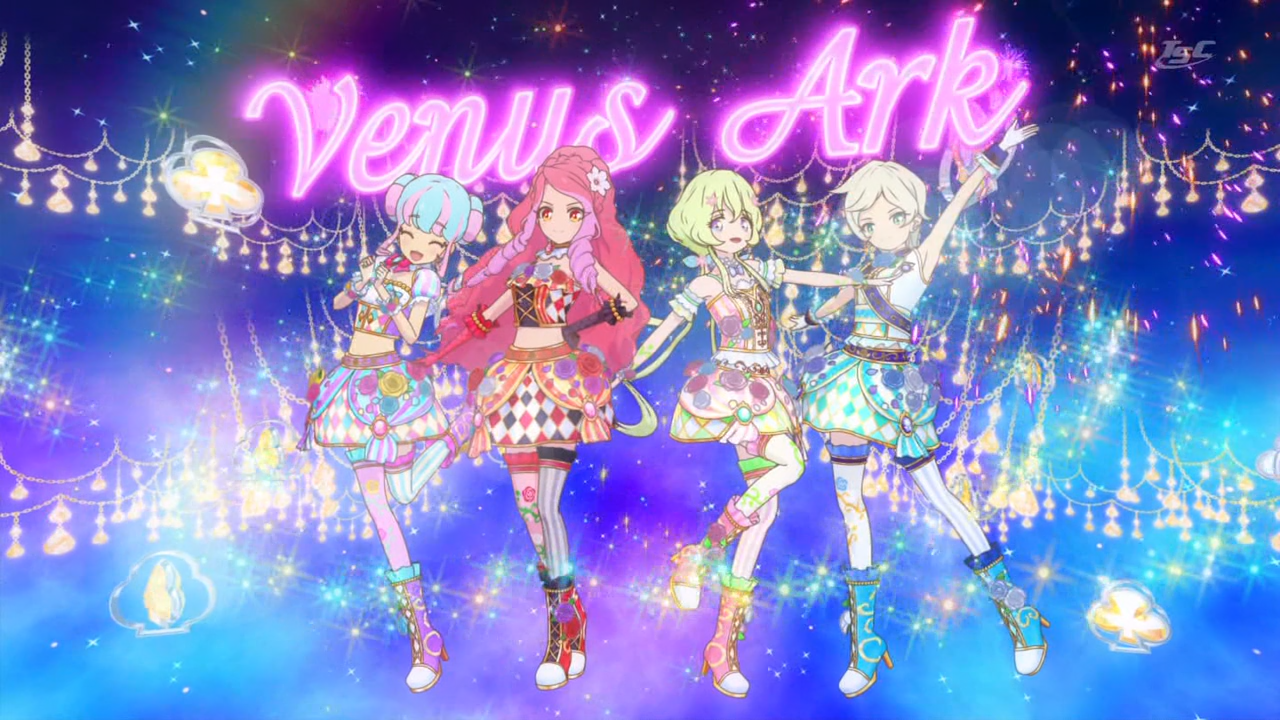 Mezashite for a new future! 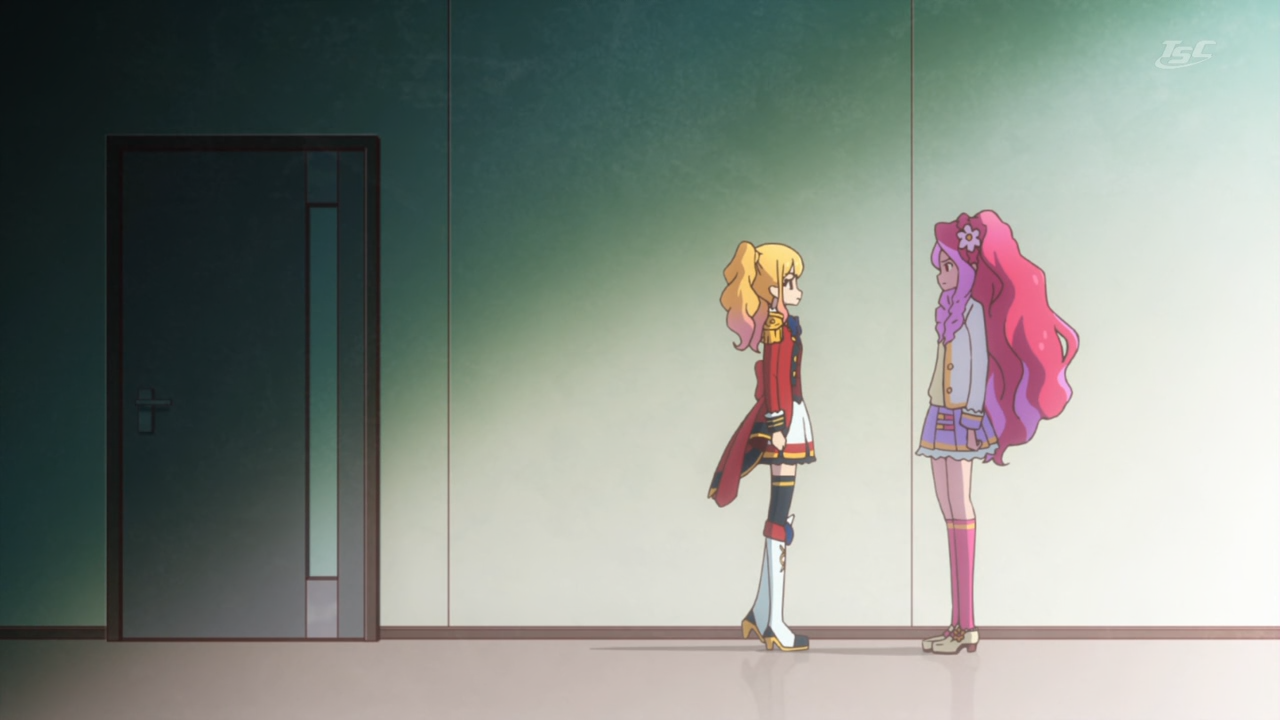 There’s a lot that I can express here in words, but as is my policy I want everyone to experience it for themselves first. I’ll just say that my expectations were exceeded. I devote this episode to Yume, in celebration of her birthday. Happy Birthday, Yume-chan. 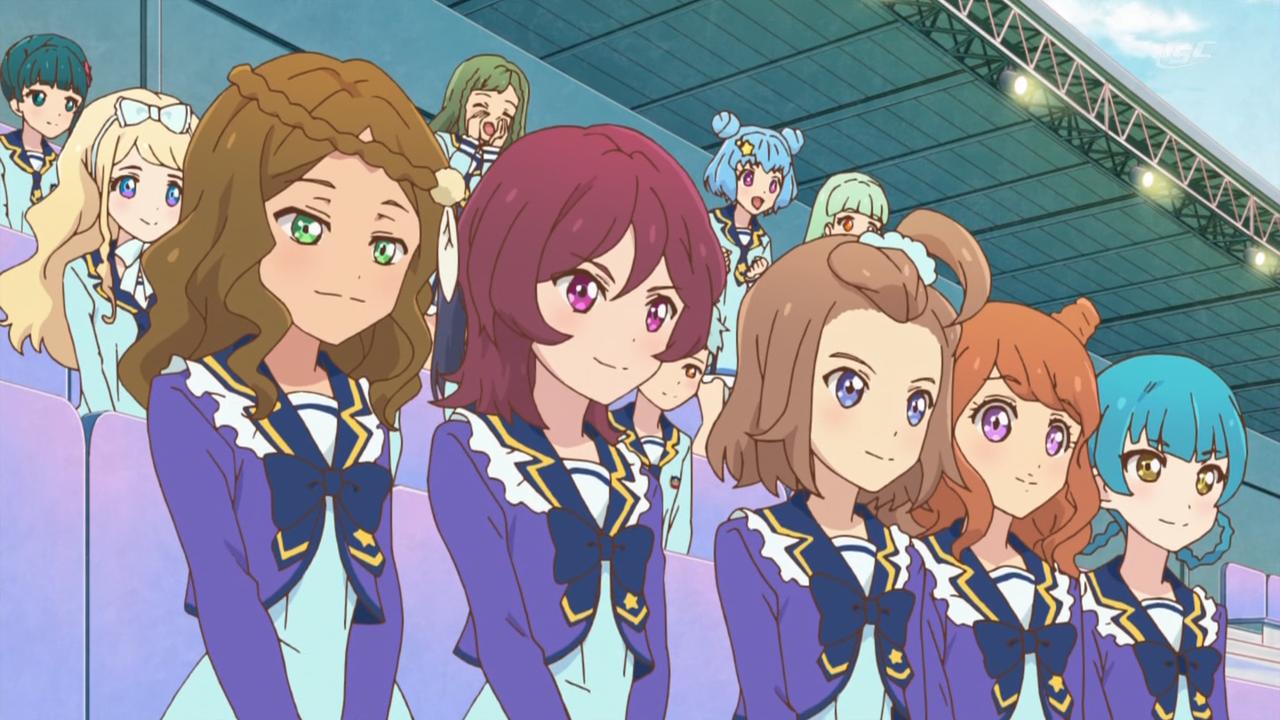 This stands in important contrast to something, but what is it?

How do you beat perfection? Dab on it. 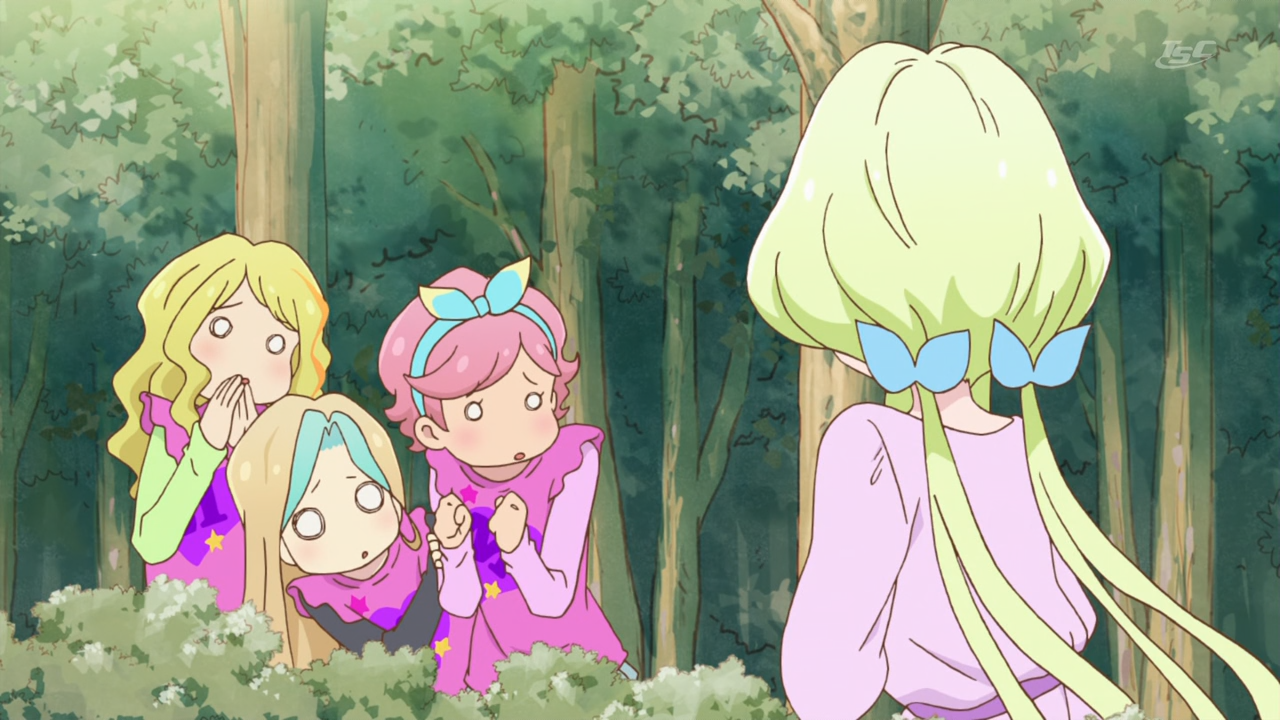 Monica is still the best, and now Aria is part of their posse

I’ve never related to Mahiru so hard as in this episode. Questioning such a fundamental aspect on competition has been long-coming in Aikatsu, and the philosophical ramifications are not likely to disappear from the minds of the viewers that easily. With that said there were some real surprises, and some real heartwarming moments. I’m very excited for what’s to come in the future. 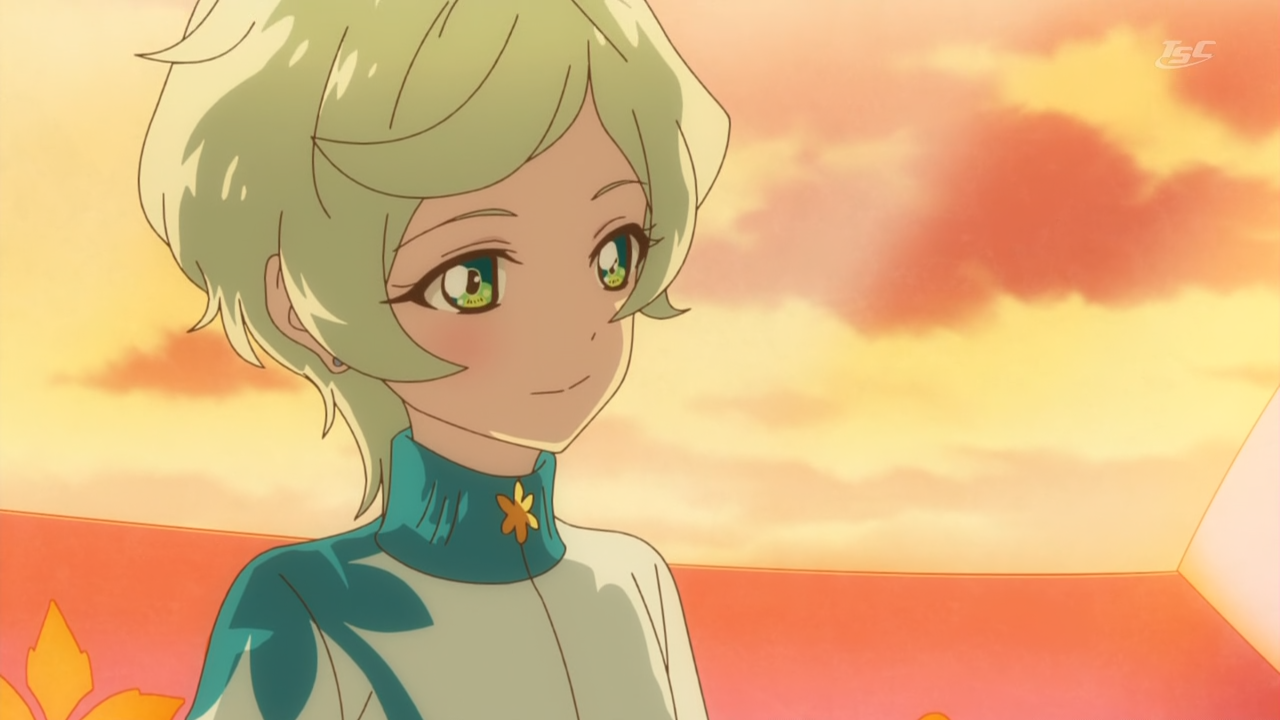 What does it mean… to become light?

It begins in earnest. I was considering writing a long explanation about just how tragic Elza is, but I may not get around to it before it’s too late. In any case, she easily ranks among the top three most troubled Aikatsu idols and I believe strongly that she is deserving of empathy. When even your opponents worry this much about you, perhaps it’s time to reconsider your choices. And yet, being unable to do that in part due to external factors outside your control is what makes this so painful to watch. I can only pray that she is saved soon. In lighter news, a oneshot girl I love is coming back next week, so I’m super excited for that too!