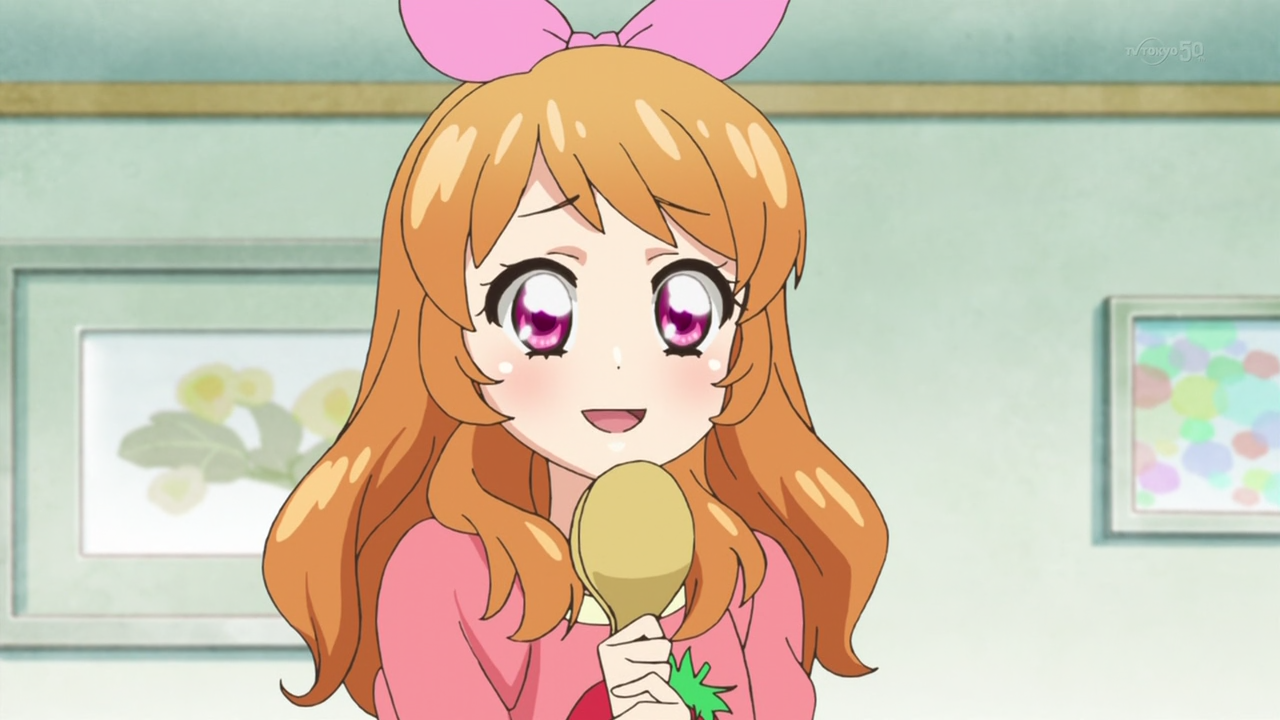 With the coming of a new season, there is a new organization of what each of us do, and I’m back on TL duty for Aikatsu after half a year off. I have many thoughts about this episode, which I won’t bore you with before the break.

First, you thought Akari came out of nowhere? Then I suggest you rewatch episode 50.

Anyway, with the turning of the seasons and the beginning of spring, Aikatsu is taking a huge change in direction. Up to this point, all of season 2 was about the so-called Starlight and DreAca “rivalry”, which can be boiled down to “Seira is as good as Ichigo for some inexplicable reason so they’re going to tie for 23 episodes”.  And you know what, that’s exactly what it felt like. It wasn’t even a vehicle for the usual talent vs hard work thing Japan loves to do, since Ichigo has both whereas Seira basically just has talent, and not even as an idol. Sunrise screwed up her introduction and development so much that every single episode I dreaded her appearance enough that it impacted my enjoyment of the show. Even in the last episode (the hot springs one) I had this nagging feeling in the back of my mind that she’d show up and ruin everything. I don’t even have anything against her personally; in any other show she’d be pretty interesting and fun to watch develop (can she learn how to smile properly, what happened to her bandmates, will Noelle ever smile for her, etc). But Sunrise just dropped the damn ball and made her equal to Ichigo, who we had personally seen mature and develop over an entire year, who then went off to America to train even more. She didn’t even have the whole “mysterious” vibe like Mikuru does, since we got her background almost immediately.

And to make it worse, she brought in the era of ties. In season 1 they had the balls to make girls lose; in fact, Ichigo lost in the second episode and several times after, even all the way through the Tristar arc. It was her losses that fostered her growth, not to mention her friendships. Come to think of it, I think the only tie was between Ran and Hikari, and that was completely acceptable because it showed that they were true rivals and was explored through Orihime and Johnny’s conversation. One simple fix for this would have been to have trading wins and losses (if they were well deserved), so that each school would grow stronger to overcome their rivals. If all you’re going to do is tie, then there’s no reason to even try harder. And again, every single one of the Starlight’s have at least two years of experience, often more from their childhood. The victory in the Star-Dream Festival & Carnival felt hollow, as if we were just relieved from endless weeks of torture rather than given a well-deserved reward. Even Seira’s development about relying on her friends was skimmed over so much that it hardly feels like she changed.

But now, finally, we’re back to season 1 goodness. Mizuki is back and kicking ass. She’s got her new prodigy, Mikuru, by her side, and they’re going to take the idol world by storm. Parallel to that, Ichigo has now found her new young idol to raise personally, Akari. In just one episode, Akari has shown a clear motivation, development and growth from a failure, determination to chase her dreams for a specific goal, and plenty of room to grow both as a person and as an idol. Ichigo saw all of that, and accepted her without hesitation. Now without any delay at all, she’s taking Akari on stage alongside her, again paralleling what Mizuki once did all that time ago. I don’t believe for a second that Akari will even come close to how well Ichigo did during that concert, but I can see Ichigo using this opportunity to teach her that she’ll never be Ichigo, and should develop as her own person. In the second episode since she’s been introduced!

Basically, I think that we’ve finally returned to the true roots of Aikatsu: competition, growth, friendship, cooperation, and a real aspiration to become the top idol. It’s a bit sad that the alternative Starlights and DreAcas are going to be forgotten (because honestly, it feels like DreAca was just a vehicle to introduce Seira poorly as Ichigo’s equal for this second half when they go vs MM), and most likely they’ll be dumping Akari too after 5-10 more episodes so that IchiSei can fight MM while Akari prepares to be the protagonist for S3, but I’m finally excited to see the next episode of Aikatsu again, and I hope you are too. To motivate you even more, we should be returning to Thursday releases now that there are no other shows to interfere. Our subbing activities, Subkatsu! is about to get even more passionate!