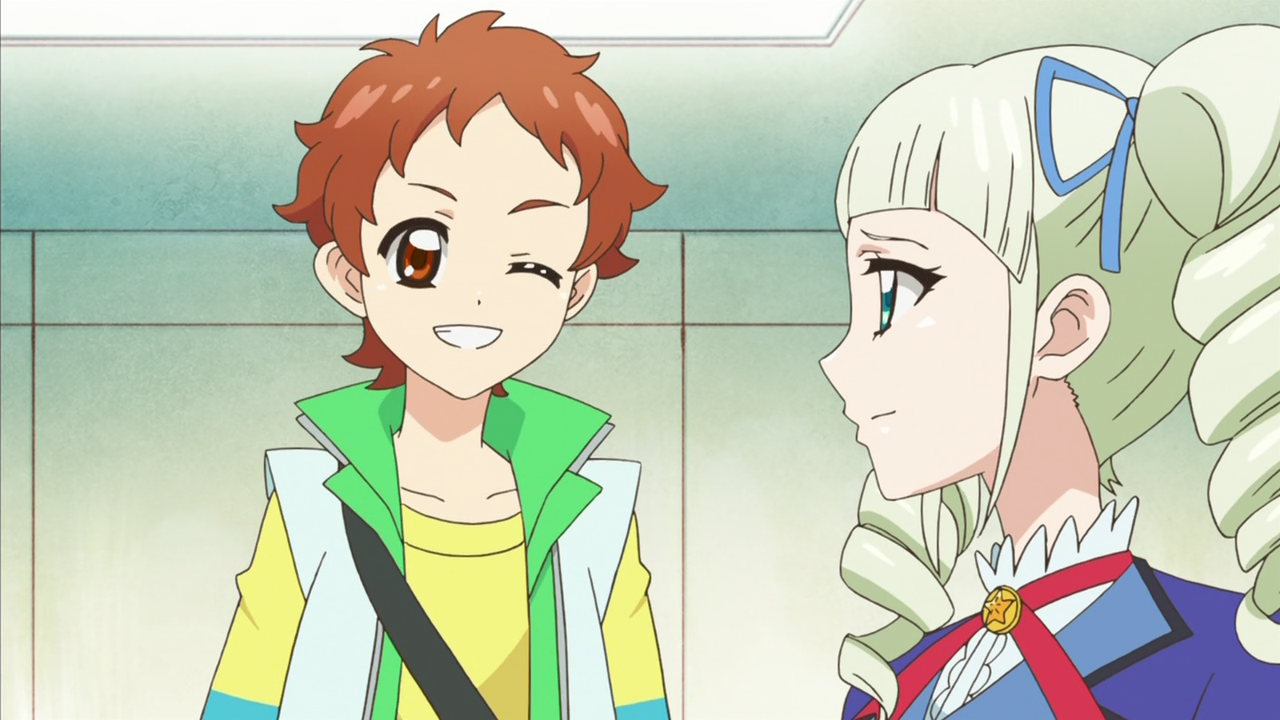 Well somebody finally gets her new CG (spoilers: it’s not Shion). So there are some notes, and a couple maybe are spoilers? So they’ll be after the break.

Raichi’s pen name is ドレミファソラ・一番星, which is made up of do-re-mi-fa-so-la and first star (pronounced “ichiban boshi”). Ran comments that right in the middle is ra-ichi, which is his name. She doesn’t comment on the boshi=star->Hoshimiya part, but it’s kind of obvious.

押す means “push” in the physical sense, and 推す means it in the “recommend” sense.

PowaPuri fans are called プリンス (purinsu), which 1) Has the “purin” part of PowaPowa Puririn in it, 2) Sounds like “prince”, and 3) “Purin” also is the Japanese word for pudding. 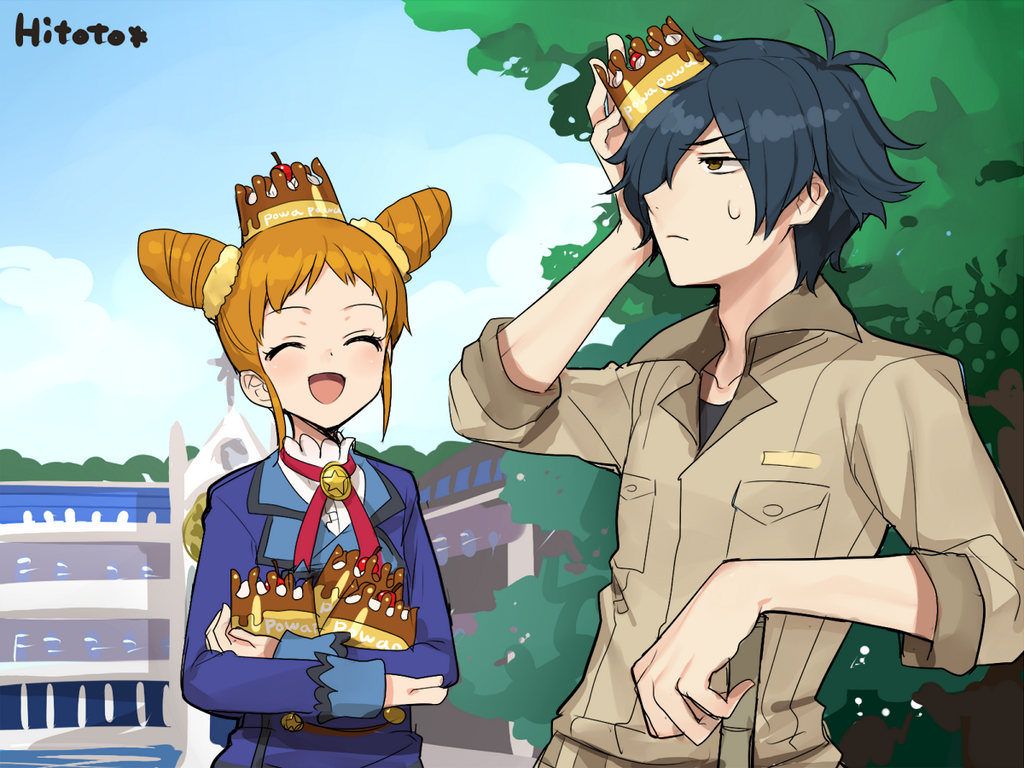 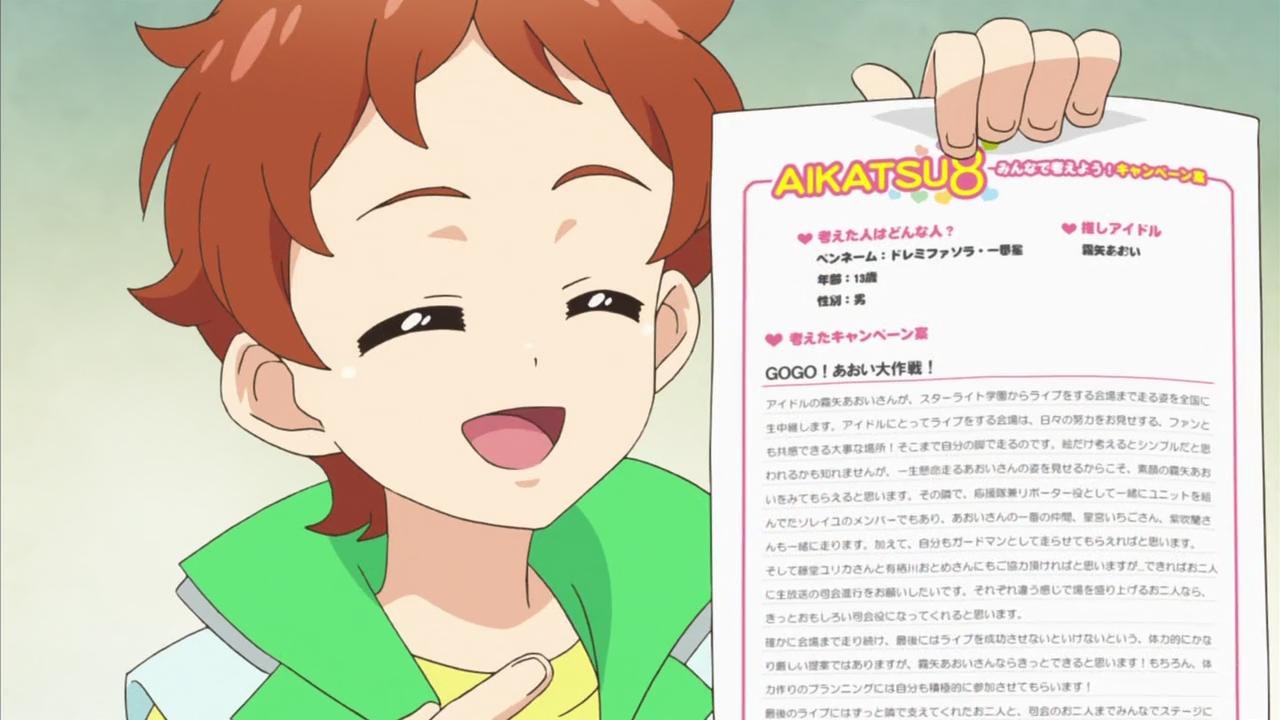 Also, here’s the translation of the plan Raichi writes

Campaign Idea
Go go! Aoi Project!
We will broadcast Kiriya Aoi running all the way from Starlight Academy to the concert hall. To idols, the concert hall is a place where they can showcase their daily efforts, and also interact with their fans! That’s why it’s important to go there on their own two feet. It may seem like a very simple thing, but because we will be showing off Aoi-san’s earnest efforts, I believe everyone will see her best qualities. Alongside her as cheerleaders and reporters will be the two from her unit Soleil, not to mention her best friends, Hoshimiya Ichigo-san and Shibuki Ran-san. Moreover, I would also like to run as her guardsman. I would also like to ask for the help of Toudou Yurika-san and Arisugawa Otome-san but… I would prefer that they MC the live broadcast from on site. Because they are both so unique and interesting, I believe this is the best way to fire up the fans.
To run all the way to the concert hall and give every effort to make the concert a success takes a lot of physical energy and is really exhausting, but I believe Kiriya Aoi can pull it off! It goes without saying that I will be putting in all my effort to train as well!
Alongside the two girls who have always supported her, as well as the two who are offering their assistance, the live concert will…

And the rest is off screen.