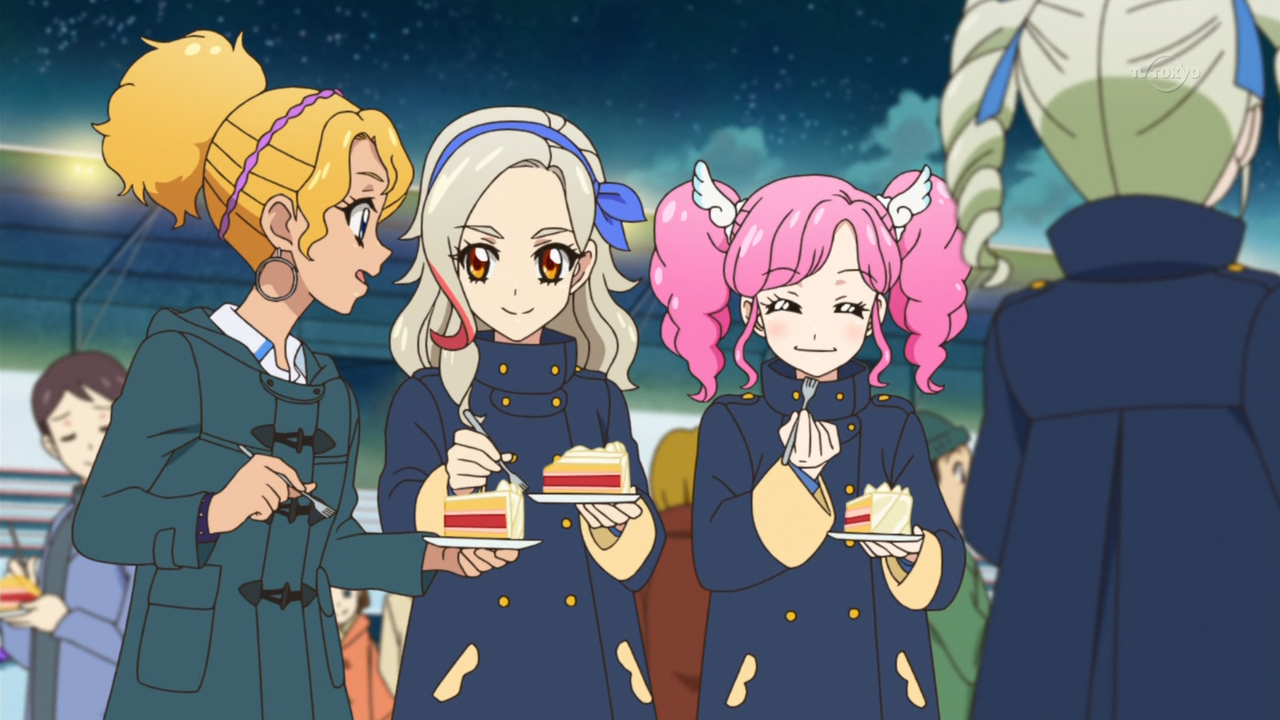 Wow there’s a goldmine of stuff to say about this episode. First and most importantly, no new Aikatsu this week, December 31. It will return on January 7. There were literally four new dialects this week which were done with varying degrees of success: Kansai (which I guess isn’t new), Kyushu, Aomori, and Akita (which is host to our new friend Hanawa Yayoi). And speaking of her, her gimmick relates to a local demon called the Namahage, which you can see on her head and in the statues. There were three old OST pieces that I caught this episode, which I’ll relate after the break, as well as several KiraKiratter tweets that were prohibitively hard to typeset. Look for them after the break as well. Alright then, Happy Merry [Late] Christmas!

The old songs that were in this episode were the one where Ichigo says hi to everyone (it’s kind of upbeat), instrumental Wake up my music when Mizuki and Ichigo join Luminas for the show, and the original Christmas song way at the end. How’s that for making it feel like the old cast has come back? As for the tweets, they’re not very interesting, so here are just the contents:

Nono: It’s finally the Luminas Tour final stage! I hope that it snows for the occasion!

Plants: It looks like I’ll complete my New Year’s Resolution. I’ll do my best for the remainder! Now to make a plan for next year…

Miyabi: Akari-chan and the girls did a great job. I was very happy when they came to see us in Kyoto. Let’s all continue to do the best Aikatsu we can!

Risa: It’s lovely they have the final stage on Christmas Eve! I hope it ends up a white final stage ~I’m definitely going to see~

Wait a second, could that first one possibly be a certain gardener we all know and love…?

Aoi: Ooh, I like that idea, Nono-chan and Risa-chan. I’ll be praying I’ll get to watch the final stage in the snow!

Risa: It’s lovely they have the final stage on Christmas Eve! I hope it ends up a white final stage ~I’m definitely going to see~