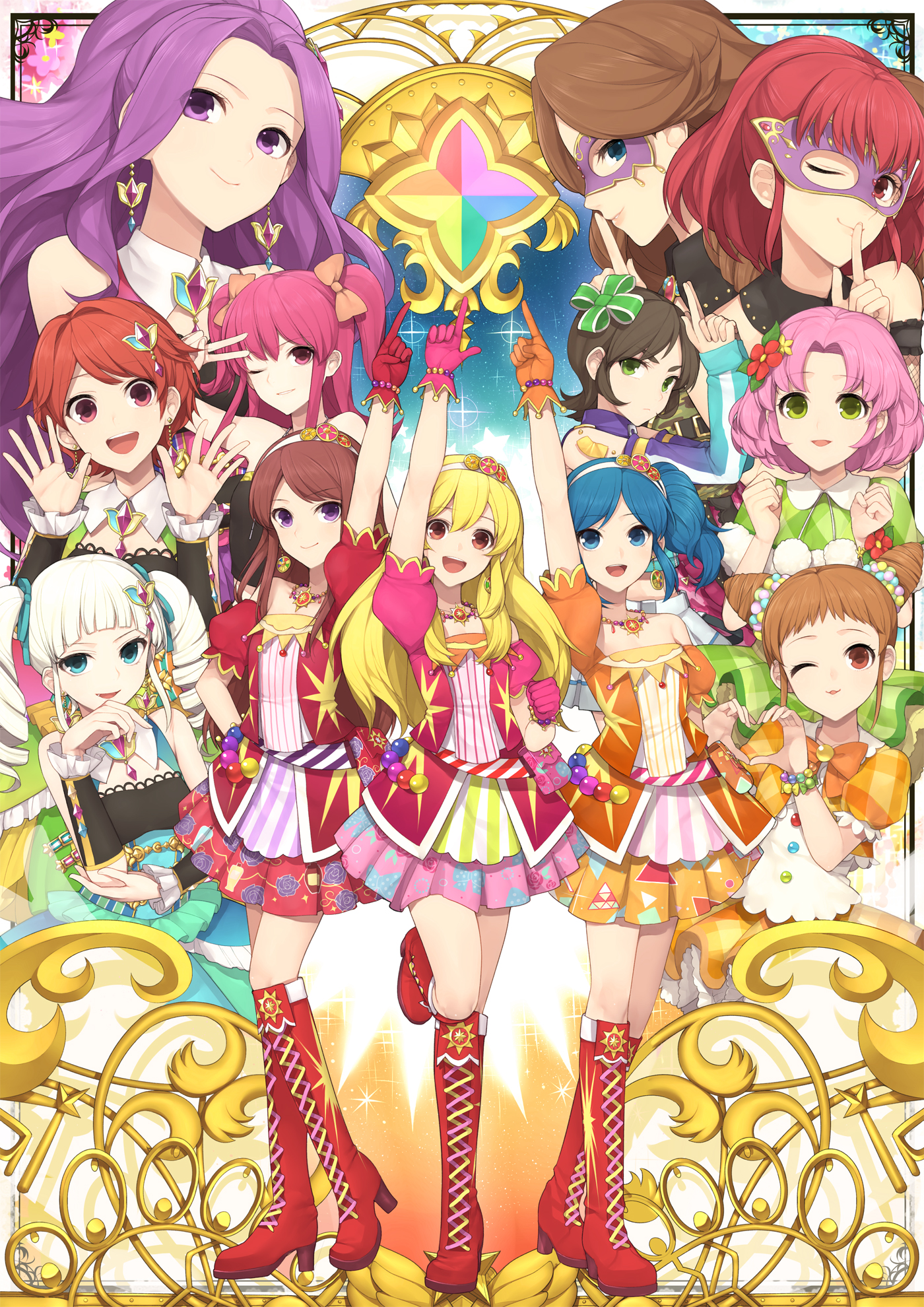 Yes, finally, one cour after the epic finale of Aikatsu season 1, we bring you the updated batch! For the most part this was a one man effort, and I went over every single episode again, fixing timing, adding signs, updating consistency, and just making it better in general. This is the best you’re going to get [spoiler]until the BDs come out and we get someone to retime everything[/spoiler]. The effects are most pronounced near the beginning since we sucked, it helps that furzi stuck the missing aphorism segments onto the first seven episodes, and Etoce did a great help at the end since I’m incompetent with xdelta. As a bonus, I took various notes as I rewatched everything which you can find below the break.

Happy Winter Solstice, and help seed if you can (since it’s literally just me).

Images of every single coord used in the show

Mizuki is (not) a bitch:
1) Mizuki says that she wants Ichigo to catch up with her (see ep33)
2) She is vague about what she thinks will come of Ichigo and Aoi’s friendship…
…But she supports Ichigo and believes she’ll catch up with her
3) Allows Ichigo to be her assistant manager. Also trains the hardest
5) She teaches Ichigo how to runway walk, and tells her about Ran stepping with her left foot
7) “May your dreams tonight be sweet as a crepe”
9) Encourages Ichigo to get the rest of the masteries
10) “A miracle isn’t something that you wait for to happen.
It’s something that you {i1}make{i0} happen. Good luck.”
12) She joins everyone for a fun Christmas party
13) When Orihime tells her to pair with Ichigo for the special live, Mizuki tries to go
against it so that she doesn’t accidentally crush her
More or less teaches Ichigo how to spoil herself with restraint…
…however, she appears to feel fear or apprehension when she remembers Ichigo’s potential
And finally, Mizuki appears to be seriously considering Ichigo for a potential equal
15) “The moon shines solitary in the night sky, beautiful because you cannot reach it.” (???)
16) She starts using “Hoshimiya” instead of “Ichigo-chan”
Gives her special personal training for Special Appeals
Teaches her the importance of frustration, and the desire to move forward, which also
reveals a lot about her personality and how much she cares for her fans
17) Covers for Ichigo so hard she becomes a Legend
19) Fufufu, subtle hints towards both Yurika’s effort and how to make a character
26) Gives Ichigo some nice senpai advice
28) Tells Ichigo that she’s looking for a partner right before the FGC finals
Does four fucking special appeals again
“It’s true that you aren’t ready to be my partner just yet, but if you keep biting onto me like a soft-shelled turtle…
Hoshimiya Ichigo… You might be able to become the sun.”
33) Mizuki always stood alone so as not to hurt her friends, but now she has steeled herself
to find partners she can rely on. “I want to take on everyone’s feelings myself.”
36) Mizuki immediately notices Ran’s distress and starts to act on helping her
37) She’s really looking out for Ran this entire episode. Seriously, just read her text again.
41) Personal tips. Also, Love You~
45) Just all sorts of talking on equal footing now. Almost there, Ichigo~
46) “I want nothing more than for them to catch up to me”
47) This is probably the most humanizing episode for Mizuki
48-50) Too much to mention

Otome deserves the title:
10) Her character seems a bit different… almost as if she’s really shy.
Still, they characterize her as a girl who gets up no matter how much she falls down.
For all the sweets she eats, she exercises even more than needed
Image training for a job a months in advance. Awareness of her own faults
“I’m a bit of a klutz. That’s why I need to practice much more than other people.”
Once again: wow, Otome’s original personality is way different
13) Otome starts her -tan spree here (Ichigo only)
15) Otome is still incredibly spacy. Guess it sets up for her serious mode later
So kind! She chooses to help both Ikuyo-san AND get her premium coord. Also never gives up
But is reasonable enough to step down when asked. Also, passes off the ring she just got
20) She feels no fear
27) She ran all the way from Starlight to Angely Mountain to do training on her own,
determined to show Mizuki her growth
30) Fucking sprints to see her top designer after hearing about Sakura’s love for her brand
Is the first girl to get her second Premium Dress while simultaneously helping Sakura
33) Makes it to the top of the wall first with Ichigo
38) Made the independant unit PowaPuri all on her own, and even brought Shion into the spotlight
45) Writes down new lyrics as soon as she thinks them up, even at the pool
xx) Other than the main three, Otome is the only idol to get two Premium coords

S-rank translations/references:
7) “Aikatsu, you katsu, we all katsu!” Completely original pun to replace the original
Thanks for liking it so much, everyone
9) kokoroe=mastery. yes, this took me fucking forever to get
11) Sparkling Daydream
14) Bad reference to “Beginner”. Oh god, two of them. Fucking 0048
22) Minus one for missing an aikatsu/katsuai untranslatable pun
23) Another bad reference: Standby Ready
27) Dance like you want to win!
31) First, the song line “senobishita pafyuumu” into “Wearing Mom’s perfume”
Second, the “boils down to your own efforts”, referencing the kinpira
39) Embarrassing remarks aren’t allowed (though I fudged the Japanese a bit)
40) Idle Activities. My masterpiece.
46) There is some retroactive shit going on here to somehow match the ED of season 2