Why you should actually pay attention in series with real plot.

First, some images that I didn’t want to use in the release post. 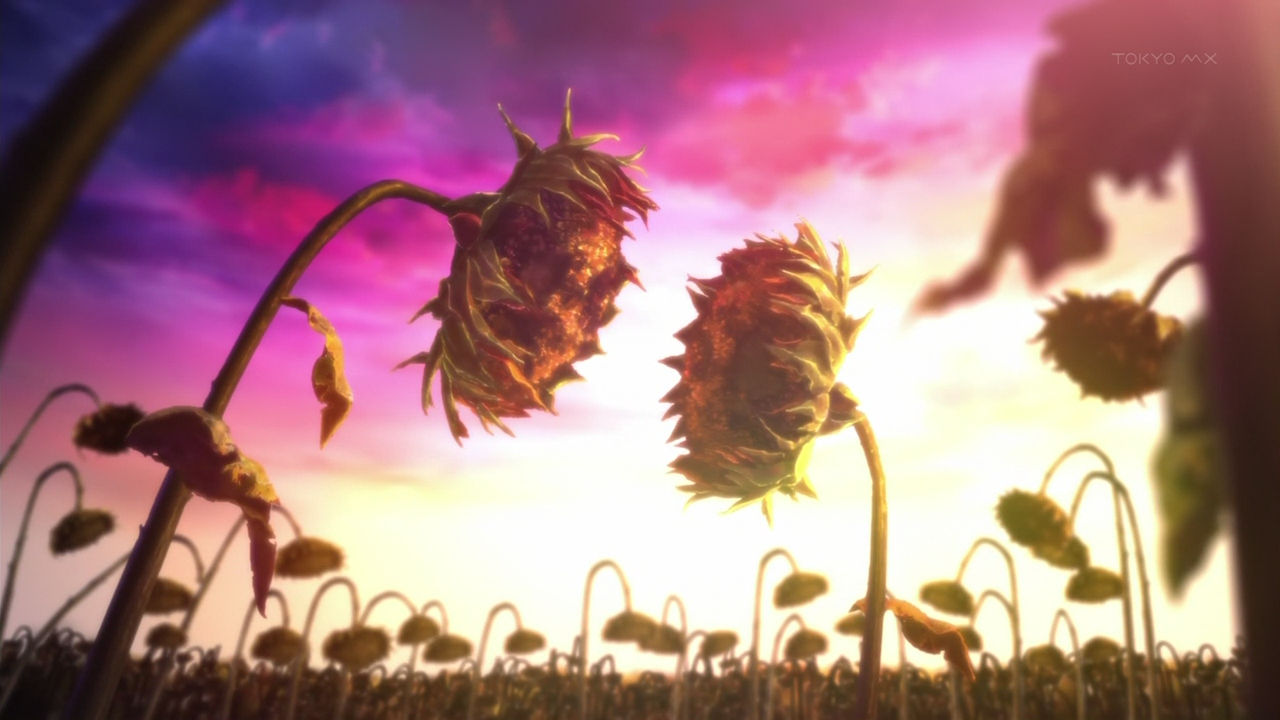 Some people legitimately do not understand this symbolism 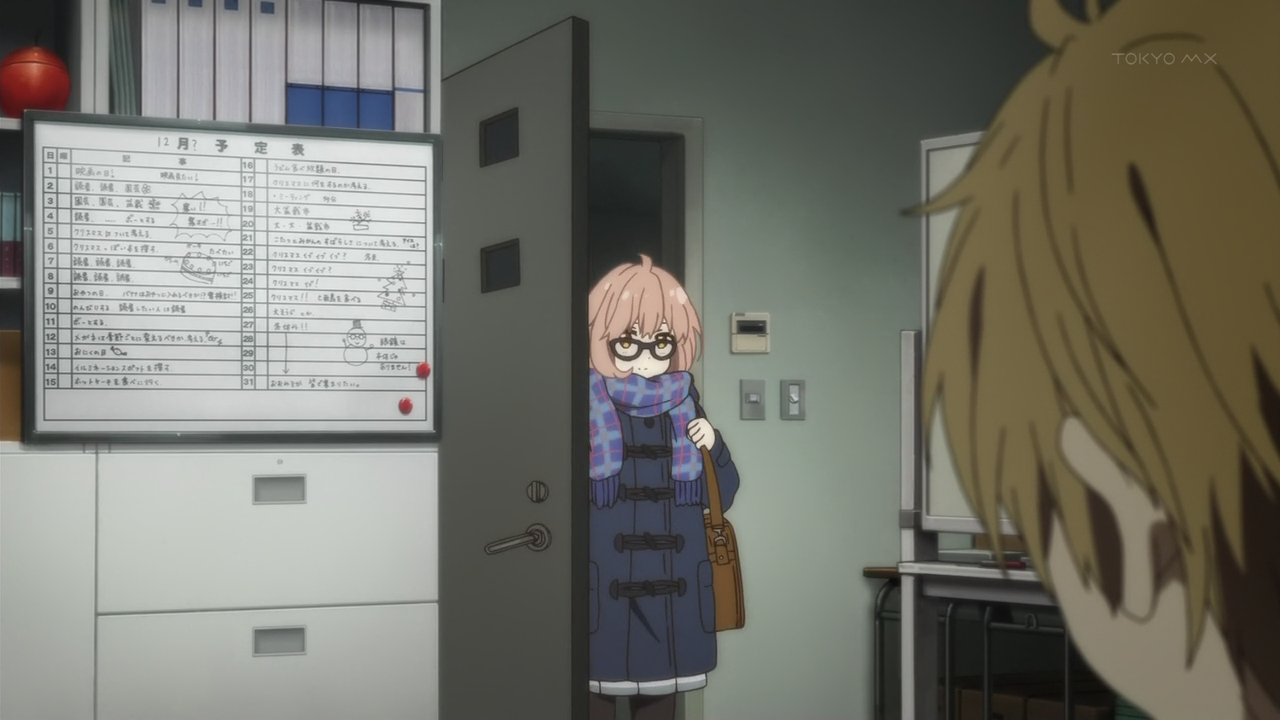 This is the whiteboard in the world of black. Note the “December?” 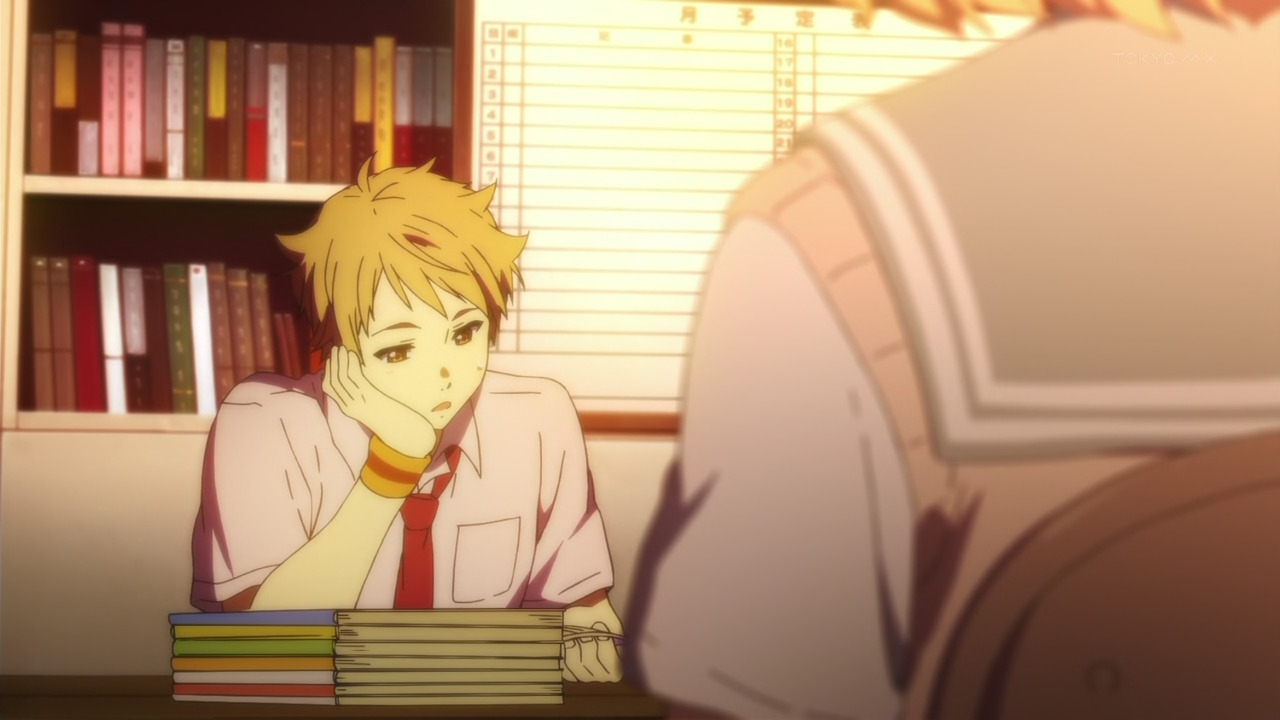 And this is in the world of white. Lives up to it’s name, I suppose

No, they didn’t kiss
No, Mirai is not an amazing actress who’s been tricking them all this whole time
No, Izumi is not a 100% bitch who wants to simply kill Akihito

Mirai is just an unfortunate girl who was forced to kill her best friend after she was possessed by the Hollow Shadow not too long before the story started. Then the family that had taken her in despite her cursed blood apparently decided to kill her for revenge, although whether that’s actually true is yet to be seen (it would be best to assume that it is true for the purposes of this speculation). Note that this didn’t happen immediately, as Mirai is seen mourning Yui’s death with Sakura a few episodes past. As she is being chased, Izumi uses her powers or connections to stop the attempts on her life, thus putting Mirai in her debt. Izumi’s motivations seem to be simply to kill KnK so that it doesn’t destroy the planet. It is no more than a coincidence from her point of view that this coincides with killing Akihito. She may have feelings of wanting revenge for Hiroomi, but that too is unknown (remember that we have no idea what she was like before the series starts, although her frozen barrier use give some indication). Now, whether she needs to kill KnK simply to save the world, to gain personal power or influence, or to gain an edge against the Exorcist Association is still up in the air.  At this point, I posit that even though she is using Mirai, she is completely transparent with her. Izumi tells Mirai everything, warns her not to get close to Akihito, and doesn’t have any personal grudges against him either. The part that most interests me is who the man in the basement is. Is he just the cliche head of the family that has used his powers to live for a long time, or something completely unimaginable? Is Izumi really working for him, or is she planning to try and save as many people as possible before pulling out at the end?

Meanwhile, Miroku is conducting his own plans. He represents the Exorcist Association, but appears to be acting independently and using its power for his own needs. He takes the spear (or whatever it is) and gives it to the young and vulnerable Sakura, telling her that she can keep it if she kills Mirai. Not only will she now collect shade shards with it, thus powering it up for later, she will also make attempts on Mirai’s life. Is he trying to save Akihito? Probably not. It appears that his main goal in this is to 1) Power up the spear, and 2) Get rid of at least one nuisance. It’s also a bonus that he gets to meddle with Izumi’s plans at the same time. Once Sakura fails, he takes the spear back, and later goes to absorb the Void Shadow. We still have no real idea what Ayaka does with the shards or what exact reason Izumi took it from Mirai, though I suppose that we can speculate it was solely to keep Mirai in near-poverty, and thus desperate. Izumi figured that it would be safe deep within the Nase house, but Hiroomi inadvertantly let Miroku in to absorb it. Miroku is most likely absorbing power for his own sake, and intends not to destroy KnK, but to absorb it. This will give him power not just over the Nases, but over the Association. That’s as far as I can go with the information we have now.

So now on to Mirai. This episode finally answered the question of why Mirai stabbed Akihito in the first episode despite being so adverse to killing shades. Fortunately the episode itself goes over most of the important points from the past episodes, so there’s no need to repeat that information here. I state now that Mirai was just a normal girl cursed by her blood and her fate, and led around by Izumi to kill KnK. Her emotional blogging, her habit of cleaning her glasses when she’s caught lying, and her hesitation in harming Akihito are all her “honne”, her true face. Despite Izumi’s warnings not to get too close to Akihito, as a teenager she inevitably starts to fall for him. She realizes that Akihito has suffered just as much as her, if not more. Then there are both the White and Black worlds. The world of white that Akihito sees was partially created by Mirai, partly in order to sooth his mental wounds, and partly as a final goodbye. We can see in the black world of KnK that Mirai is spending time with what is presumably Akihito’s pure shade half. She tries her hardest to bring him back to acting like his normal self, but depressingly fails. Moreover, she’s wearing the glasses that he was going to give her as a birthday present. There’s no way in hell that you can believe Mirai is a heartless, manipulative bitch at this point, nor that she ever was at all.

Oh, and about Izumi’s lies(?). She says that if the Calm ends with Akihito still a shade, he’ll be like that forever. Although this seems like she just says it to trick Mirai, it’s not necessarily false. Because his shade half has weakened less than his human half, when the Calm ends it will surely increase in strength again. It’s not strange to think that it would continue to be prominent at that time. What about the method of Mirai using all of her blood to drive KnK out of Akihito and into her? That was clearly what happened, although whether Izumi expected them both to die is up to whether you hate her or actually use your head. She may be cold, but there were other methods she could have used to force Mirai to kill him earlier.

I think the real question now is: who is Akihito’s father? Is his shade half some random humanoid shade like Ayaka and Ai, and all half-shades have the potential to turn into KnK? Or was his mom literally impregnated by the KnK/twisting of human hearts/whatever? Whatever the case may be, I for one am looking forward to the last couple of episodes.